Thanks to beforeitsnews.com. First published in ClimateProgress.org.

NASA: It Rained So Hard the Oceans Fell

by Barry Saxifrage, via the Vancouver Observer

“The year 2010 was one the worst years in world history for high-impact floods. But just three weeks into the new year, 2011 has already had an entire year’s worth of mega-floods. “ – Meteorologist Jeff Masters

I spend hours a day researching what New York Times columnist Thomas Friedman calls “global weirding”: the destabilization of our weather system fueled by the three million tonnes of fossil fuel pollution we inject into it each hour. So it is a rare day when something shocks me as much as a recent U.S. National Aeronautics and Space Administration (NASA) report on last year’s extreme rainfall.

As most locals know from soggy personal experience, our corner of planet Earth since last spring has been a bit wetter and greyer than normal. And next door, our Washington neighbours donned their gum boots and slogged through their fourth wettest year since 1895.

Still, we got off lucky. Very lucky it turns out.

According to this jaw-dropping NASA report, worldwide rainfall and snowfall were so extreme, in so many places last year, that sea levels fell dramatically. 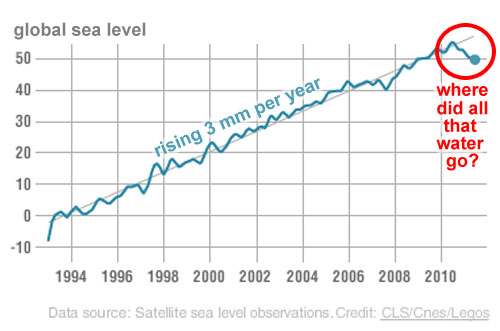 Sea levels have been rising steadily for over a century as the ever warmer ocean water expands and the world’s remaining glaciers and ice sheets melt. In fact sea levels are rising twice as fast now as they were a few decades ago. As the NASA chart above shows there have been some ups and downs but nothing in the modern satellite record comes close to the 6 mm drop worldwide last year.

While 6 mm might not sound like a lot, when collected from the surface of all our planet’s oceans itadds up to 26,000 gallons of water per human.

So just where did all this missing water go?

The ringleader of the great water heist was one of the strongest La Nina cycles of recent times. La Nina shifted and altered weather patterns causing extreme precipitation to funnel into places like India, Pakistan, Australia, and northern tiers of both South and North America.

In the map below, produced from NASA’s GRACE satellite data, blue indicates areas that gained water last year. The darkest blue areas gained as much as 50 mm in one year. 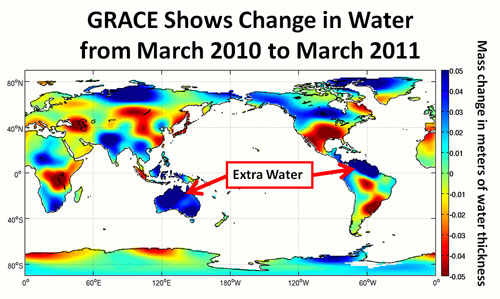 These dark blue spots are also the sources of the world’s epic floods of the last couple years which not only left tens of millions homeless and destroyed agriculture and infrastructure, but also left behind so much water that global oceans were depleted by 6 mm.

A YEAR OF RECORD FLOODING

One fifth of Pakistan under water displacing 20 million people after freak monsoon rains that wouldn’t stop. 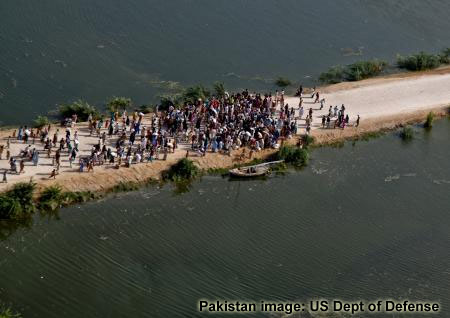 140 million Chinese affected by weeks of record flooding and landslides.

“Biblical” flooding in Australia covers an area the size of France and Germany combined. Australia had its wettest spring since records began 111 years ago, with some areas suffering over 4 feet of rain. At one point freak rains of six inches fell in just 30 minutes. Another town got 14 inches in one day. 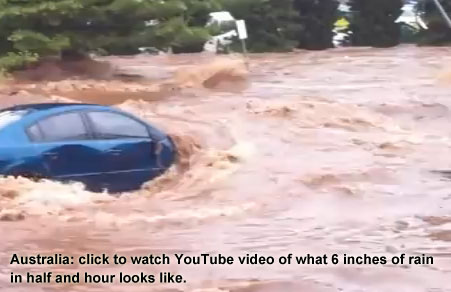 Unprecedented flooding on the Ohio and Mississippi Rivers. A series of record-breaking “Snowmageddon” storms left the winter snow pack in parts of Canada and USA at record levels. When it melted, a huge swath of middle USA flooded. Major General Michael Walsh of the US Army Corps of Engineers laments: “Everyone I have talked with–from boat operators, to labors, scientist and engineers, and truck drivers have all said the same thing–I never thought I would see the day that the river would reach these levels.” 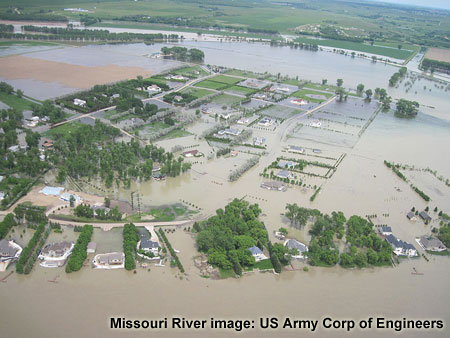 Tennessee has 1000-year deluge flooding Nashville. In just two days up to 15 inches of rain (420 billion gallons) fell from the sky. 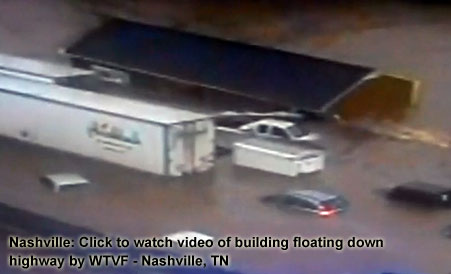 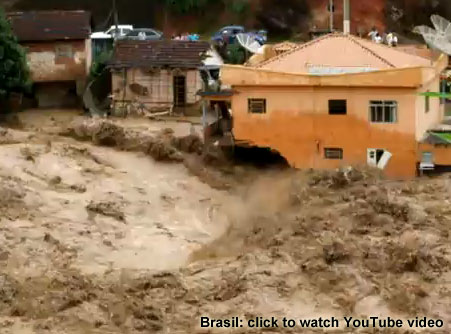 Columbia hobbled by 11 months of nearly non-stop rain as five to six times more rainfall than usual inundates the nation. Millions of disaster victims and billions in damages. Colombia’s President: “the tragedy the country is going through has no precedents in our history.” Country Director in Colombia, Gabriela Bucher: “Some parts of the country have been set back 15 to 20 years.”

THE ROLE OF GLOBAL WARMING

Would these recent extreme events have happened without all our fossil fuel CO2 in the atmosphere? NASA’s top climatologist, James Hansen, says: “almost certainly not”.

“It’s not the right question to ask if this storm or that storm is due to global warming, or is it natural variability. Nowadays, there’s always an element of both… there is a systematic influence on all of these weather events now-a-days because of the fact that there is this extra water vapor lurking around in the atmosphere than there used to be say 30 years ago. It’s about a 4% extra amount, it invigorates the storms, it provides plenty of moisture for these storms and it’s unfortunate that the public is not associating these with the fact that this is one manifestation of climate change. “

“In my thirty years as a meteorologist, I’ve never seen global weather patterns as strange as those we had in 2010. The stunning extremes we witnessed gives me concern that our climate is showing the early signs of instability.”

Munich Re, one of the world’s top re-insurance companies, states:

“…it would seem that the only plausible explanation for the rise in weather-related catastrophes is climate change…Globally, 2010 has been the warmest year since records began over 130 years ago, the ten warmest during that period all falling within the last 12 years. The warmer atmosphere and higher sea temperatures are having significant effects. Prof. Peter Hoeppe, Head of Munich Re’s Geo Risks Research/Corporate Climate Centre: ‘It’s as if the weather machine had changed up a gear. Unless binding carbon reduction targets stay on the agenda, future generations will bear the consequences.’”

As the Economist magazine recently summed up when talking about how some climate changes are happening much quicker than the worst case predicted by climate models:

“When reality is changing faster than theory suggests it should, a certain amount of nervousness is a reasonable response.“

“The term ’100-year event’ really lost its meaning this year.”

Well in the short term the seas will start rising again. As the NASA report states:

“water flows downhill, and the extra rain will eventually find its way back to the sea. When it does, global sea level will rise again. ‘We’re heating up the planet, and in the end that means more sea level rise’”.

What happens in the medium and long term depends on us. We humans really have only one question to answer: To burn or not to burn?

OPTION A: Leave most fossil fuels in the ground — forever.

OPTION B: Keep doing what we are doing and dig up every last crumb of carbon and burn it.

The climate science is clear that we cannot burn most of the fossil fuels we already know about and also have a stable enough weather system that we can continue to prosper.

As local Nobel laureate and world famous climate scientist, Andrew Weaver, explained in a talk at UBC the other night, just reducing the rate at which we burn fossil fuels won’t prevent dangerous levels of climate change beyond 2C warming. Instead we must totally eliminate fossil fuel emissions.

Weaver showed that even if humanity cut 90% of our fossil fuel use by 2050 but kept burning that last 10% into the future, then we would still heat the climate by more than 2C. That sends us into the realm of dangerous and dramatic climate changes that Canada, USA and every major nation has stated clearly we must avoid.

As Weaver summed it up:

“At some point we just have to say stop.”

In Canada that means forcing our governments to take responsibility for leaving most of our fossil fuels reserves – like BC coal, Alberta oil sands, frackable natural gas — in the ground forever. It also means transitioning our own lives and businesses off of fossil fuel burning completely.

What we are doing right now — our current path – is to burn it all. We have absolutely no limits, and none planned, for any of our nation’s fossil fuel resources. Weaver was asked to summarize the current climate policies of our federal government. He responded: “This will be quick. There aren’t any.”Instead we are heading full tilt towards ever “weirder” and ever more extreme weather.

“I suspect that crazy weather years like 2010 will become the norm a decade from now, as the climate continues to adjust to the steady build-up of heat-trapping gases we are pumping into the air. Forty years from now, the crazy weather of 2010 will seem pretty tame. We’ve bequeathed to our children a future with a radically changed climate that will regularly bring unprecedented weather events–many of them extremely destructive–to every corner of the globe. This year’s wild ride was just the beginning. “

Hansen, an expert on the climate of both Earth and Venus, has a starker warning for us. In the face of continued political inaction to stop the climate threat, he decided to calculate what it would take for Earth’s climate to repeat what happened on our sister planet Venus – a runaway greenhouse effect that would boil away the oceans and destroy all life on the planet:

“I’ve come to conclude that if we burn all reserves of oil, gas, and coal, there is a substantial chance we will initiate the runaway greenhouse. If we also burn the tar sands and the tar shale, I believe the Venus syndrome is a dead certainty. “

Our Canadian government is currently using our tax dollars to market an aggressive expansion of the tar sands under the banner of “ethical oil”.

Hansen got arrested along with more than 1,200 others protesting this very attempt to expand production of the unconventional tar sands deposits for global markets saying:

Repeatedly he has stated that if we fully exploit our unconventional tar sands it means “game over”for hopes of avoiding dangerous climate change.

At this point the climate science is clear that the only truly “ethical oil” is the oil we leave in the ground forever.

– Barry Saxifrage researches, charts and writes about the latest climate change information for the Vancouver Observer and other publications. Much of his work can be found on his website, Visual Carbon.

This entry was posted in elder wisdom, new economy, Reality Ramp-Up, visions of the future, waking up. Bookmark the permalink.