Empire then and now: If “history repeats itself” this time, there will be no more next time.

During my high school years, in the late ’50s, my boyfriend’s father, a man for whom I had immense respect, warned that the United States was on a trajectory to suffer the same fate as that of Rome. I remembering wondering about his remark, which he repeated more than once and was based on his reading of historical accounts. I was a willing listener, since my particular PTSD (and who of us does not suffer from PTSD??) was tied to my terror of nuclear war, a recurring nightmare that began as a two-year-old, when I heard the radio announcement that our “great nation” had bombed Hiroshima to smithereens.

During those same teenage years, I had convinced both my father and his father to make bomb shelters. Ours was state of the art, engineered into one basement room; theirs was more like a potato cellar hole in the ground.

I was totally sure that none of us would ever live to see the year 1960, the year we graduated. In fact, I told my father that there would be no point in applying for college, since we’d all be dead by the end of the year. He made me apply.

Then, when we not only all lived through that year, but John F. Kennedy was elected President, I was so stunned by the good news that I found it very difficult to absorb. And yes, for the next three years, we did appear to have entered a new Camelot world.

Until November 22, 1963, when I was four months pregnant with my first child. At that point I began to read books like The Power Elite, a ’50s classic on how power works in America. And woke up  to the goodie goodie, world savior mask that America had worn to disguise its real aims.

I’ve not fallen asleep since. In order to survive and thrive, I’ve made it a point to sink below the chimera of egomaniacal geopolitical power plays and ask: how does nature work? And how can we learn from her? What IS natural, spontaneous, and not just contrived, slanted, spun in a particular direction to serve a selfish agenda?

Of course the word “natural” got co-opted, almost immediately, by market forces that use that word as spin. We went through “organic” (still meaningful as a set of regulations that certify foods as such), and then, in the last ten years or so, “sustainable.” Until that word was taken over by the UN Agenda 21 and paired with another word “development,” to create an oxymoron, when we realize that “development” (with its extraction of natural resources) MUST be limited on a finite planet. So now we’re on to the next new word, “resilient,” with “regenerative” coming up close behind.

It may be that the main problem with humans is that we have substituted language for the telepathic communion that all of nature (and apparently, most ETs) enjoy. Only if we can pretend one thing and mean another can we actually lie. If we are transparent, lies are not possible. So I’m all for us recovering our capacity for telepathy, something that every mother knows with her children, at least up to some point in their young lives.

But back to the subject matter at hand, the use and abuse of power by the U.S.Empire. And Dick High Sr., my then boyfriend’s father and future father-in-law (for a time) was, I suspect, right. The U.S. IS following the trajectory of ancient Rome, and it’s good to be aware of that. Here’s a piece from Fred Burks, of wanttoknow.info, that came in on my email feed this morning:

Once upon a time there was a country that was very small and, on the whole, very good.

Its citizens were proud and independent and self-reliant and generally prosperous. They believed in freedom and justice and equality. But, above all, they had faith. They had faith in their religion, their leaders, their country and themselves.

And, of course, they were ambitious. Being proud of their country, they wanted to make it bigger. First they conquered the savage tribes that hemmed them in. Then they fought innumerable wars on land and sea with foreign powers to the east and west and south. They won almost all the battles they fought and conquered foreign lands.

It took many generations, but at last the good, little country was the richest, mightiest nation in the whole, wide world — admired, respected, envied and feared by one and all.

“We must remain the mightiest nation,” said its leaders, “so that we can insure universal peace and make everyone as prosperous and decent and civilized as we are.”

At first, the mightiest nation was as good as its word. It constructed highways and buildings and pipelines and hygienic facilities all over the world. And for awhile, it even kept the peace.

He surrounded himself with a palace guard of men chosen solely for their personal loyalty. He usurped the powers of the Senate, signing treaties, waging wars and spending public funds as he saw fit.

When little countries far away rebelled, he sent troops without so much as a by-your-leave. And the mightiest nation became engaged in a series of long, costly, inconclusive campaigns in far away lands. So some disillusioned soldiers refused to obey orders and some sailors mutinied, even though the leader raised their pay. And in some places the mightiest nation hired mercenaries to do its fighting.

And because it was the richest nation, it worshiped wealth and the things wealth bought. But the rich grew richer and the poor grew poorer through unfair tax laws. And in the capital 1 in 5 were idle and on welfare.

When the poor grumbled, they were entertained by highly paid athletes and the firing of expensive rockets into the air which sometimes fizzled. But the poor often rioted and looted and burned in their frustrated rage.

Worst of all, the citizens came to learn their leaders were corrupt — that the respected palace guard was selling favors to the rich and sending spies among the people, creating fear and distrust.

So it was that the people lost faith. They lost faith in their leaders, their currency, their rockets, their postal system, their armies, their religion, their laws, their moral values, their country and, eventually, themselves.

And, thus, in 476 A.D., Rome fell to the barbarians and the Dark Ages settled over Western civilization.

Moral: For what is a nation profited if it shall gain the whole world and lose its own soul.

This timeless column first appeared in The San Francisco Chronicle
on May 27, 1973 and was reprinted July 22, 1999 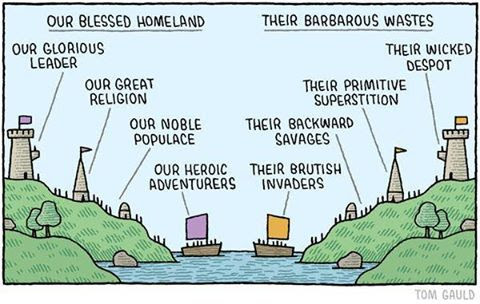 Meanwhile, to bring things up to date, here’s Abby Martin on Empire Files, two years ago:

And here she is with Colonel Lawrence Wilkerson, two days ago.

1 Response to Empire then and now: If “history repeats itself” this time, there will be no more next time.