Carroll Krause, dying of cancer, reads the ingredients of “Ensure”

Posted on September 1, 2015 by Ann Kreilkamp

Brilliant, Carrol. Thanks so much for this concisely drawn description of America’s so-called container “food.” In the comment section she adds:

I would guess that it’s gotten this bad because nobody bothers to step up and say “Wait, this isn’t right.” Call me a rabble-rouser, but at this point in my life I see little benefit to being polite and demure. 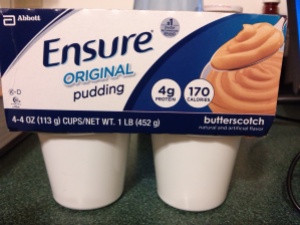 Last week I was having problems with my digestion, so I stopped eating for a few days. The kind folks at Hospice were alarmed, and sent over a sack filled with different kinds of nutritional “foods” that are designed to keep the life-force strong. Hospice had the very best of intentions, and I am grateful for their concern. Although I do not wish to malign them in any way, the stuff they sent over was not real FOOD. In fact, I’m outraged at the idea that they feed this stuff to dying people.

The first three ingredients in the so-called “pudding” are water, sugar, and corn maltodextrin (a heavily processed starch with a high glycemic index). Yum, yum. Moving on to the ersatz “shake,” the first three ingredients are water, corn maltodextrin (again) and sugar. And as for the alleged nutritional apple-flavored “juice” (which bears the warning “Contains no apple juice”), the main ingredients are water, sugar, and corn syrup solids. For the sake of comparison, a Milky Way candy bar contains 37 grams of total carbohydrate. The fake “juice” contains 43 grams of total carb, which makes it significantly sweeter than the candy bar. But wait: the “shake” contains a whopping 52 grams. The “pudding” wins the carb battle with a moderate 30 grams, which is approximately the carb equivalent of three-and-a-half Oreo cookies.

What the hell is going on here? Why is this stuff being pawned off on the ill and elderly? For that matter, why is the worst food in town found at the hospital, where they dole out high-sodium, high-carb, high-junk-ingredient glop to patients and guests? 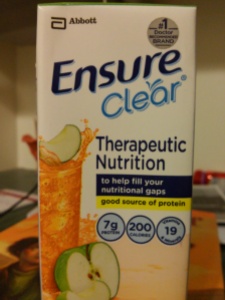 I understand that our local city hospital is now part of a corporate empire, which by appearances is so concerned with making a profit that the emergency room is now completely devoid of old magazines to page through while waiting. I understand profit and loss. And yet, why is a place that’s supposedly dedicated to saving people’s lives, and restoring health, apparently in partnership with the sugary-fake-foodstuff manufacturers?

It takes very little money to make the best therapeutic comfort-food possible, the same food that has nourished sick people for thousands of years, a nutritious foodstuff that lacks known allergens and causes no sensitivities. I’m talking about chicken broth, which is as easy to make as a salad (just more time-intensive). Instead of pushing these egregious false “foods” upon ill people, the hospital would be well advised to have someone come in two or three times a week and simmer 30 gallons or so of chicken broth. (And a pot of veggie broth too, for our vegetarian/vegan friends.) I make broth at home all the time. And despite feeling wobbly, I even made some three days ago when my own supply of frozen two-cup servings ran low. 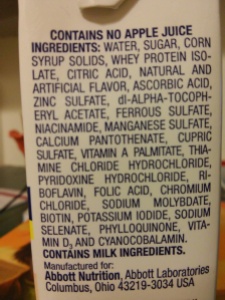 Soup is good food. Pudding can be good food too, if it has real milk and egg in it. Shakes can even be good (ice cream is, after all, quite nutritious.) And juice is good, assuming that it actually contains real juice. But this swill (I don’t know what other word to call it) from Hospice is completely vile. It’s not real food, only a collection of starches, sugars, artificial flavors and nutritional powders all mixed into water. Maybe someone who spends their life eating at fast-food joints wouldn’t object to eating Ensure products, but I do, because I know the difference between real food and fake food.

I wouldn’t feed this stuff to a dying animal, let along a dying human being. If you agree, let the hospital management know. Or snipe at them via social media until they begin to pay attention. I think it’s time for a food fight!

PhD Philosophy, 1972. Rogue philosopher ever since.
View all posts by Ann Kreilkamp →
This entry was posted in Uncategorized. Bookmark the permalink.

184 Responses to Carroll Krause, dying of cancer, reads the ingredients of “Ensure”