Earth 2.0: Does UFO/ET disclosure begin by looking in a mirror?

For those who still assume that any talk of interdimensional and exterrestrial life is nonsense, it appears that “soft disclosure” has now begun. Oh, the clues have been coming in all along, ramping up in 2014 when the Pope blessed ET as worthy of baptism — “Who are we to close doors?” — but this mirror NASA has just presented — and trumpeted, via MSM news — may be looking back at us.

Not that I personally needed this confirmation, nor does anyone I know who thinks beyond this tiny 3-D ecosystem that we call “Earth;” I’ve been dreaming of ET and probably am an ET — for who is not extraterrestrial in origin? Whose soul was born from this soil alone? We are stardust!

And stardust, like all of nature, is Alive! Aware! Conscious! Each temporary “form” within the ever-abiding Presence arising and falling, shaping itself to experience the universe in its own manner. We humans have five external senses. I swear dogs enjoy 500 senses — just within their nose alone! And cats have more! They feel all the dimensions as they ripple through this one. And birds. Oh! What do their thrilling trills convey to each other as dawn breaks over the horizon? What praises do they sing? How are plants and insects and animals all quickened by their daily arousal? Leaves! How about a single leaf? It quivers and shakes on its stem, feeling its entire tree’s links to the sun and moon and stars above, sensing its roots digging into earth below, communing through mycellium with all the other nearby trees.

To rigidly assume that we humans alone are the ONLY self-aware beings in the universe is, when you stop to think about it, hilarious, ludicrous! A myopic nightmare of self-imposed prisoners caught in a transparent cage, busy hoarding stuff and passing stuff around inside it — not daring to gaze into the infinity beyond. Why? I swear it’s because we’re afraid we’ll fall — alone, and forever — through infinite space.

So, for all of us who are still coming up to speed in terms of breaking our minds wide open to the vastness in which we are embedded, check this out:

And when we’re done with that, we might check out today’s new post by Fred Burks of wanttoknow.info, on crop circles, and what they might be telling us. 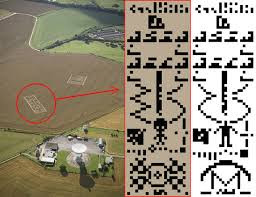 One of the most exciting, yet little-known events of this century was the formation of several highly intriguing crop circles near the U.K.’s Chilbolton Observatory. One of these crop circles, formed in August 2001, was later decoded revealing what appears to be a fascinating message to humanity.

Before reading on, click below to watch a mind-expanding, six-minute video clip from the documentary Crop Circles: Crossover from Another Dimension, which shows the beautiful complexity and gives an excellent explanation of the Chilbolton crop circles and their decoded messages.

Though some crop circles are artificially created, the sheer volume and the incredible sophistication andsize of some suggest that it would be nearly impossible for even a group of people to create them in the course of one night. And for undeniable evidence of the existence of intelligent extraterrestrial life, watch the amazing UFO footage in the Sci-Fi Channel’s Out of the Blue. This profound documentary includes riveting personal testimony from a number of astronauts, generals, and top politicians on their involvement in a major cover-up of the extraterrestrial phenomenon.

As described in the crop circle video at the link above, the most exciting of the Chilbolton crop circle messages turned out on decoding to be a clear response to the 1974 message from humanity sent into outer space. Sent to other potential denizens of our universe through the the world’s largest radio telescope in Arecibo, Puerto Rico, the original message was crafted by Carl Sagan, Dr. Frank Drake, and others. A detailed image of this transmission, with complete description, may be found on page 290 of Sagan’s 1980 book Cosmos.

This crop circle’s most intriguing formation not only imitated the exact binary form in which the original Arecibo message was sent, it gave precise information on the extraterrestrial group which formed the circle, including their population, location, and even appearance. And it appeared in a field right next to a radio telescope similar to the one that projected the original message. Below is a brief summary of key points decoded from the message:

From the aerial view [the image in the crop circle] is the shape of an ET figure. It clearly has a little stick-like body with two arms and two legs, but has a much larger head and two distinct eyes. If you decode the ‘population’ binary sequence in the actual crop formation you get a value of approx 21.3 billion. There is also some indication of a change in the basic DNA structure of ET. The additional (third) strand shown on the left and also a change in the number of nucleotides indicates a different DNA than ours.

The above excerpt is taken from a thorough analysis with detailed photos and description of this most amazing crop circle message and how it was decoded on this webpage. This page and the above video clip are well worth exploring if you are at all intrigued by this amazing message which appears to be from another race of intelligent beings who share our universe.

Crop circles are but one of many highly intriguing phenomena which are difficult to explain away. Could some of these be messages informing those with eyes to see that we are not alone in the universe? The question of extraterrestrial life continues to be one of the most baffling and profound questions about life in our universe. For those with an open mind, exploring these crop circles and the reliable resources listed in the “What you can do” section below may open you to exciting new vistas on the meaning of life for us individually and for all of humanity. Have fun exploring!

Note: Read an intriguing essay on the pair of Chilbolton crop circles which formed one year after the Arecibo message was received. Explore several other excellent UFO documentaries which present undeniable evidence that we are not alone in this universe. And check out a 17-second video purportedly capturing a crop circle being made by balls of light.