Want to save the world? Carbon is Key. “A highly efficient carbon cycle captures, stores, releases and recaptures biochemical energy, making everything go and grow from the soil up, including plants, animals and people.”

Courtney White’s new book tells how we can shift everything, and it’s mostly low-tech. We don’t have to invent anything. “Quick answer: Build topsoil, fix creeks, eat organic.” This looks like a must-read for anyone who wants to not just wake up, but get out of bed.

Especially interesting to me, when the author was visioning, she ignored political and economic divisions.

“I intentionally left out boundaries, including property lines, political divisions, and geographical separations. There was no distinction on my map between public and private land, or between wild country and non-wild. It was all one map, all carbon — all one vision in which wolves, cattle, bats, organic farmers, biologists, artists, foxes, fish, cities, and ranchers all worked together.” YES!

The carbon pilgrim via resilience.org, via Keith

I am very pleased to announce that my book Grass, Soil, Hope: a Journey through Carbon Country will be published by Chelsea Green Press in early June. I am equally pleased to announce that Michael Pollan has generously written a Foreword for my book. Here’s a quote: “Hope in a book about the environmental challenges we face in the 21st century is an audacious thing to promise, so I’m pleased to report that Courtney White delivers on it.”

It’s not in my nature to be self-promotional, but I want to get the word out. I’ll being doing more over the next four months, so you’ve been warned! In the meantime, I’ll try to explain what the book is about, though if you have been reading this column for a while then you probably have a good idea.

Grass, Soil, Hope tackles an increasingly anguished question: what can we do about the seemingly intractable challenges confronting us today, including climate change, global hunger, water scarcity, environmental stress, and economic instability?

Crazy? I thought so until I read a statement from Dr. Rattan Lal, an esteemed soil scientist, who said a mere 2% increase in the carbon content of the planet’s soils could offset 100% of all greenhouse gas emissions going into the atmosphere. Wow! But what did he mean? How could it be accomplished? What would it cost? Was it even possible?

Yes, it is possible, as I discovered. Essential, in fact.

As I know from personal experience, these strategies have been demonstrated individually to be both practical and profitable.

In Grass, Soil, Hope, I bundle them into an economic and ecological whole with the aim of reducing atmospheric CO2 while producing substantial co-benefits for all living things. Soil is a huge natural sink for carbon dioxide. If we can draw increasing amounts carbon out of the atmosphere and store it safely in the soil as life-giving and food- producing humus (the rich soil of a garden), then we can significantly address all the multiple challenges in my anguished question.

The key is carbon. That’s because it is everywhere — it’s the soil beneath our feet, the plants that grow, the land we walk, the wildlife we watch, the livestock we raise, the food we eat, the energy we use, and the air we breathe. Carbon is the essential element of life. Without it we die; with the just right amounts we thrive; with too much we suffer. For eons, carbon has been a source of life and joy to the planet. A highly efficient carbon cycle captures, stores, releases and recaptures biochemical energy, making everything go and grow from the soil up, including plants, animals and people.

In the last century or so, however, the carbon cycle has broken down at critical points, most importantly among our soils which have had their fertility eroded, depleted, and baked out of them by poor stewardship. Worse, carbon has become a source of woe to the planet and its inhabitants as excess amounts of it accumulate in the atmosphere and oceans. It’s all carbon. Climate change is carbon, hunger is carbon, money is carbon, politics is carbon, land is carbon, we are carbon. Which brings me to the hope:

We don’t have to invent anything. Over the past thirty years, all manner of new ideas and methods that put carbon back into the soil and reduce carbon footprints have been field-tested and proven to be practical and profitable. We already know how to graze livestock sustainably, grow organic food, create a local food system, fix creeks, produce local renewable energy, improve water cycles, grow grass on bare soil, coexist with wildlife, and generally build resilience on the land and in our lives.

It’s mostly low-tech. It’s sunlight, green plants, animals, rocks, mud, shovels, hiking shoes, windmills, trees, compost, and creeks. Some of the work requires specialized knowledge, such as herding livestock or designing an erosion-control structure in a creek, and some of it has high-tech components, such as solar panels or wind turbines, but most of Soil, Grass, Hope can be easily navigated by anyone.

One morning, I sat down at my dining room table and drew a map of every joyous, sustainable, resilient, regenerative, land-healing, carbon-building, climate-mitigating activity I could pull from my decades-long experience in conservation and sustainable agriculture, putting them into a single landscape. I intentionally left out boundaries, including property lines, political divisions, and geographical separations. There was no distinction on my map between public and private land, or between wild country and non-wild. It was all one map, all carbon — all one vision in which wolves, cattle, bats, organic farmers, biologists, artists, foxes, fish, cities, and ranchers all worked together.

You’re on the map. Everyone is, whether you live in a city, go to school, graze cattle, enjoy wildlife, grow vegetables, hike, fish, count grasses, draw, make music, fix creeks, or eat food — you’re on the map. You live in Grass, Soil, Hope. We all do. It’s not a mythical land, it exists – I’ve been there. I can be your guide.

I came up with the idea of the map and a carbon ranch during the summer of 2009, inspired by a WorldWatch publication by Sarah Scherr and Sajal Sthapit titled Mitigating Climate Change through Food and Land Use. In an essay published in 2011, I spelled out six strategies to increase or maintain soil health and thus the carbon content of grass or shrub-dominated ecosystems of the American West. My subsequent travel and research for the book largely bore out my hunches. The six strategies were:

(1) Planned grazing systems. The carbon content of soil can be increased by three principal methods: the establishment of green plants on previously bare ground; deepening the roots of existing healthy plants; and the general improvement of nutrient, mineral, and water cycles in a given area. Planned grazing is key to all three. By controlling the timing, intensity, and frequency of animal impact on the land, the carbon rancher can improve plant density, diversity, and vigor. Specific actions include: the soil cap-breaking action of herbivore hooves, which promotes seed-to-soil contact and water infiltration; the ‘herd’ effect of concentrated animals, which can provide a positive form of perturbation to a landscape by turning plant litter back into the soil (an intensive version of this effect is sometimes called a ‘poop-and-stomp’); the stimulative effect of grazing on plants, followed by a long interval of rest (often a year), which causes roots to expand while removing old, oxidized forage; targeted grazing of noxious or invasive plants which promotes native species diversity and vigor; and the targeted application of animal waste, which provides important nutrients to plants and soil microbes.

(2) Active restoration of riparian, riverine, and wetland areas. Many arroyos, creeks, rivers, and wetlands exist in a degraded condition, the result of historical overuse by humans, livestock and industry. The consequence has been widespread soil erosion, loss of riparian vegetation, disruption of hydrological cycles, decline of water storage capacity in stream banks, loss of wetlands and many other examples of land ‘sickness.’ The restoration of these areas to health, especially efforts that contribute to soil retention and formation, such as the reestablishment of humus-rich wetlands, will result in additional storage of atmospheric CO2 in soils. The ‘toolbox’ for the restoration of these areas is now well-developed, practical and could be implemented at scale if desired. There are many co-benefits of restoring riparian areas and wetlands to health, including improved habitat for wildlife, increased forage for herbivores, improved water quality and quantity for downstream users, and a reduction in erosion and sediment transport.

(3) Removal of woody vegetation. Many meadows, valleys, and rangelands have witnessed a dramatic invasion of woody species, such as pinon and juniper trees, over the past century, mostly as a consequence of the suppression of natural fire and overgrazing by livestock (which removes the grass needed to carry a fire). The elimination of over-abundant trees by agencies and landowners, via prescribed fire or other means, has been the focus of much restoration activity in the Southwest recently. The general goal of this work is to encourage grass species to grow in place of trees, thus improving the carbon-storing capacity of the soil. Not only can soils store more CO2 than trees, they also have the advantage of relative permanence. Trees can burn up, be cut down, die of disease or old age, all of which can ultimately release stored CO2 back into the atmosphere.

(4) The conservation of open space. The loss of forest, range, or agricultural land to subdivision or other types of development can dramatically reduce or eliminate the land’s ability to pull CO2 out of the atmosphere via green plants. Fortunately, there are multiple strategies that conserve open space today, including public parks, private purchase, conservation easements, tax incentives, zoning, and economic diversification that helps to keep a farm or ranch in operation. Perhaps most importantly, the protection of the planet’s forests and peatlands from destruction is crucial to an overall climate change mitigation effort. Not only are forests and peatlands important sinks for CO2, their destruction releases large amounts of stored carbon back into the atmosphere.

(5) The implementation of no-till farming practices. Plowing exposes stored soil carbon to the elements, including the erosive power of wind and rain, which can quickly cause it dissipate back into the atmosphere as CO2. No-till farming practices, especially organic ones (no pesticides or herbicides), not only protect soil carbon and reduce erosion, they often improve soil structure by promoting the creation of humus. Additionally, farming practices that leave plants in the ground year-round both protect stored soil carbon and promote increased storage via photosynthesis. An important co-benefit of organic no-till practices is the production of healthy food.

(6) Building long-term resilience. Managing land for long-term carbon sequestration in vegetation and soils requires building resilience, which refers to the capacity of land, or people, to ‘bend’ with significant or unexpected changes without ‘breaking.’ The idea includes the economic resilience of the landowners, managers, and community members. For example, cooperation among disparate individuals or groups, such as biologists, conservationists, ranchers, and policy-makers, with the goal of improving land health, can help to build ecological and economic resilience within a watershed. This can have two important effects: direct storage of CO2 in the soil, as humus is created, and the strengthening of relationships required for the maintenance of healthy soil over time.

It all went into the map. Here’s what we produced: 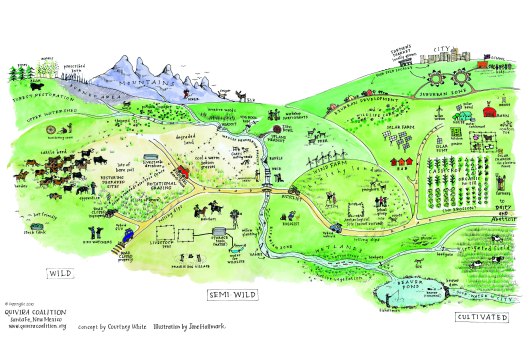 A former archaeologist and Sierra Club activist, Courtney dropped out of the ‘conflict industry’ in 1997 to co-found The Quivira Coalition, a nonprofit dedicated to building bridges between ranchers, …

This entry was posted in 2014, local action, new economy, unity consciousness, Uranus square Pluto, visions of the future, waking up. Bookmark the permalink.

0 Responses to Want to save the world? Carbon is Key. “A highly efficient carbon cycle captures, stores, releases and recaptures biochemical energy, making everything go and grow from the soil up, including plants, animals and people.”