Reuters: “Polls suggest that the growing crisis in Syria, and the emotionally wrenching pictures from an alleged chemical attack this week, may actually be hardening many Americans’ resolve not to get involved in another conflict in the Middle East.”

If we really are in the midst of a massive global currency revaluation (see Wilcock and Keenan and Zap), then of course only WAR is enough of an over-the-top distraction to take our minds off the rug pulling out from under the bankster-cabal-ruled plutocracy that the revolutionary transformational ongoing, inexorable Uranus/Pluto square (2012-2015) was bound to expose and tear down.

But, it doesn’t seem to be working anymore, this adrenalin-fueled, intensely destructive and addictive false-flag rush to judgment (and profits for the Military Industrial Complex) that up until now has pulled a blind, complacent public into its roiling wake. YES!

And wow, even Reuters (reportedly cabal-ruled), gets the picture: 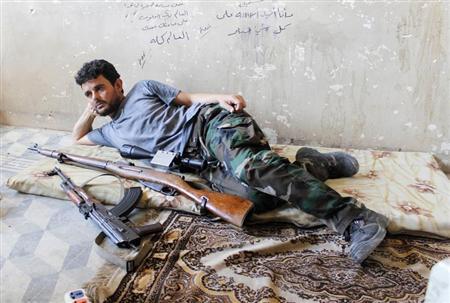 Americans strongly oppose U.S. intervention in Syria’s civil war and believe Washington should stay out of the conflict even if reports that Syria’s government used deadly chemicals to attack civilians are confirmed, a Reuters/Ipsos poll says.

About 60 percent of Americans surveyed said the United States should not intervene in Syria’s civil war, while just 9 percent thought President Barack Obama should act.

More Americans would back intervention if it is established that chemical weapons have been used, but even that support has dipped in recent days — just as Syria’s civil war has escalated and the images of hundreds of civilians allegedly killed by chemicals appeared on television screens and the Internet.

The Reuters/Ipsos poll, taken August 19-23, found that 25 percent of Americans would support U.S. intervention if Syrian President Bashar al-Assad’s forces used chemicals to attack civilians, while 46 percent would oppose it. That represented a decline in backing for U.S. action since August 13, when Reuters/Ipsos tracking polls found that 30.2 percent of Americans supported intervention in Syria if chemicals had been used, while 41.6 percent did not.

Taken together, the polls suggest that so far, the growing crisis in Syria, and the emotionally wrenching pictures from an alleged chemical attack in a Damascus suburb this week, may actually be hardening many Americans’ resolve not to get involved in another conflict in the Middle East.

The results – and Reuters/Ipsos polling on the use-of-chemicals question since early June – suggest that if Obama decides to undertake military action against Assad’s regime, he will do so in the face of steady opposition from an American public wary after more than a decade of war inIraq and Afghanistan.

Some foreign and U.S. officials – notably Republican Senator John McCain, whom Obama defeated for the presidency in 2008 – have called Obama too hesitant in deciding whether to act inSyria. But several Americans surveyed in this week’s poll, including Charles Kohls, 68, a former U.S. military officer from Maryland, praised Obama’s caution.

“The United States has become too much of the world’s policeman and we have become involved in too many places that should be a United Nations realm, not ours,” Kohls said in an interview. “I don’t think we ought to” intervene in Syria.

Kohls said the possibility of a chemical attack did not alter his belief that the United States should stay out of Syria, or any war for that matter.

Obama has called the suspected chemical attack near Damascus on Wednesday “an event of great concern” and directed U.S. intelligence agencies to investigate the allegations of chemical use as he weighs potential responses.

The president met with his national security advisers on Saturday but U.S. officials said he has not decided whether to intervene.

U.S. defense officials, meanwhile, have repositioned naval forces in the Mediterranean to give Obama the option for a missile strike on Assad’s regime, which has been backed by Russia andChina.

Obama has been reluctant to intervene in the Syria war, where rebel forces opposed to Assad are made up of dozens of militant factions, some not friendly to the United States.

The president warned Syria’s government last year that any attempt to deploy or use chemical or biological weapons would cross a “red line.”

The White House said that Assad’s military appeared to cross such a threshold in June, and responded to reports of Syrian troops using chemical weapons by agreeing to offer military aid to vetted groups of Syrian rebels.

It does not appear that any U.S. weapons have been delivered to rebels so far. As the war has escalated, Obama’s administration has come under increasing pressure from various governments, including those in France and Israel, to respond more forcefully to what many have called an unfolding humanitarian and political crisis.

However, Obama does not appear to be feeling much pressure over Syria from the American people.

In this week’s Reuters/Ipsos survey of 1,448 people, just 27 percent said they supported his decision to send arms to some Syrian rebels; 47 percent were opposed. The poll has a margin of error of plus or minus 2.9 percentage points for each number.

About 11 percent said Obama should do more to intervene in Syria than sending arms to the rebels, while 89 percent said he should not help the rebels.

Obama is considering a range of options. The most popular option among Americans: not intervening in Syria at all. That option is backed by 37 percent of Americans, according to the poll.

Less popular options include air strikes to help the rebels (supported by 12 percent of Americans); imposing a “no-fly” zone over Syria that would ground Assad’s air force (11 percent); funding a multi-national invasion of Syria (9 percent), and invading Syria with U.S. troops (4 percent).

Deborah Powell, 58, of California, said she initially opposed any involvement by the United States but now supports arming the rebels.

“I was against any involvement after watching a (television) program that said if we give (rebels) the weapons they could turn them against us, but I think now we need to give them the weapons,” Powell said.

Asked what changed her mind, she said: “What’s going on over there is terrible.” However, Powell praised Obama’s wariness toward getting the United States involved in another war.

Some Americans believe the use of chemical weapons has changed the game in Syria, and that the United States should get involved as long as other countries did, too.

Jonathan Adams, 56, of California, said that he was “happy that we didn’t get involved from the start and I’m glad Obama was cautious. But I think we have gotten past the point of where we should’ve been involved in some way.”

He said reports of chemical weapons use “went way past the line.”

**To see the Reuters/Ipsos daily tracking poll on whether the U.S. should intervene in Syria if chemical weapons are used there, go topolling.reuters.com/#!response/TM43/type/day/dates/20130531-current